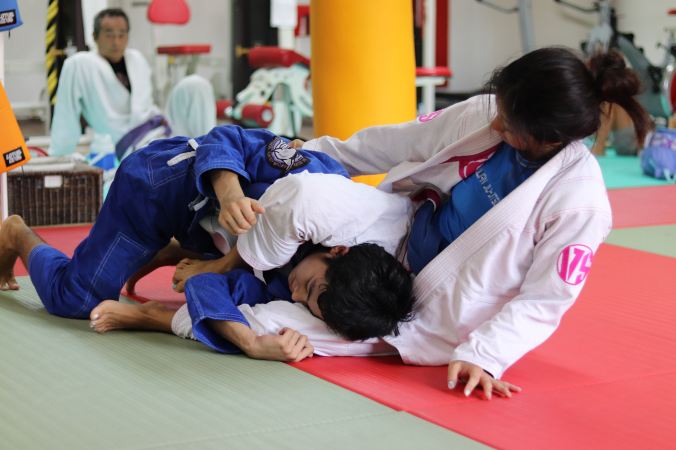 One of the most frequent things you hear in BJJ is “move your hips“.

Brazilian teachers tend to say “escape your hips“. Which is an odd-sounding translation of presumably something that sounds better in Portuguese. In American and English it usually gets turned into “hip escape“, as in, “do a hip escape here“, “it’s not working because you need to hip escape more“.

We hip escape up and down the gym as a warm up (also known as “shrimping”) because it’s a fundamental movement you need to have in your tool box that you can pull out without having to think about it.

But why? What is it? Simply put: It’s designed to create more space between you and your opponent on the ground.

You can use hip escapes for escaping bad positions like side control and mount. But it also has benefits for attacks too. Basically a good rule of thumb is that if what you’re doing isn’t working try doing a hip escape and doing it again. The change of angle and leverage will probably fix it.

Now we know what a hip escape is, let’s get to the point of all this.

When we say “move your hips” that’s not the part of the body that you need to move from. If you just moved from your hips you’d never go anywhere.  You’d just spasm on the floor like a dying fly having its last buzz. What you actually need to do is push with your toes and feet on the ground so that your hips move.

Your hips moving is the result of the action, not the action itself.

Which brings me onto Tai Chi Chuan and the dantien (the lower abdomen area of the body).

All wise and knowledgeable Internet-enabled Tai Chi practitioners know that we need to “move from the dantien” in Tai Chi Chuan. (This is the supposed secret to Tai Chi that you get told by your wise master only after you have paid the required tuition fees for a number of years. 🙂 )

But again, where does the action originate? I would say that, just as in JiuJitsu, you don’t actually “move from the dantien” by originating action there. Your dantien moves, but it’s your foot that provides the impetus. Your foot pushing against the ground is where the ‘power’ comes from in Tai Chi Chuan.

(A side note here for the Order of Advanced Tai Chi Wizards of the Internet: When you get this concept of the power from the ground you will find that you can actually originate the movement in the dantien as a kind of dropping force that is then rebounded from the ground, so it’s less of a push with the legs. File this under “advanced” if it makes no sense right now and come back to it later).

What Tai Chi Chuan specialises in is transmitting this power to the extremities without interfering with it as much as is humanly possible. We know that in Tai Chi we need to be relaxed (song), which seems like the last thing you’d want to be if you have to hit something hard, but there is a method in the madness.

In Tai Chi Chuan you are trying to transfer that power – the ground reaction force – from your foot all the way to your fingers as smoothly as possible and directing it with the dantien. This is called ‘threading a pearl through the 9 crooked gates‘ in the Tai Chi classics. The gates here are the joints of the body. All the breaks in connection between your foot and fingers are the points where power leaks out. Usually we cover these things up by using muscular strength to get by – you can spend years fooling yourself with this, and it’s a very hard habit to stop.

Points of interest, where we generally mess this up, are the lower back (keep it open) and the shoulders (stop using them as a power source). The whole body should be Song.

‘Relaxed’ doesn’t mean light and floaty. It means heavy and rooted like a stone.

4 thoughts on “Tai Chi should be heavy, like a stone”