Born in 1990, Wang Yan became head coach of Cheng village training centre in 2013 and is as a Taiji fighter as well as a coach, not to mention an expert in forms. He was one of the “nine tigers” – the best nine students of Chen ZiQiang. There’s an interview with him in English on Chen Taijiquan blog, with some great pictures from his private collection. The interview is pretty long, but there are lots of really interesting insights into his daily training, San Da competitions training and how exhausting it all was!

I’ve cherry-picked a few quotes below:

On his own training:

“When a student grows a little older, reaching his late teens and early twenties, then the school starts putting much more attention to learning taolu (forms).”

“When I was a young student, the training was more strenous then now. The approach has changed nowadays towards a somewhat softer way. Students now come from more comfortable backgrounds and are, generally speaking, often more interested in computer games than in serious training.”

“Some of us developed more in the direction of Taiji fighting, while the others became the very best in various Taiji forms.” 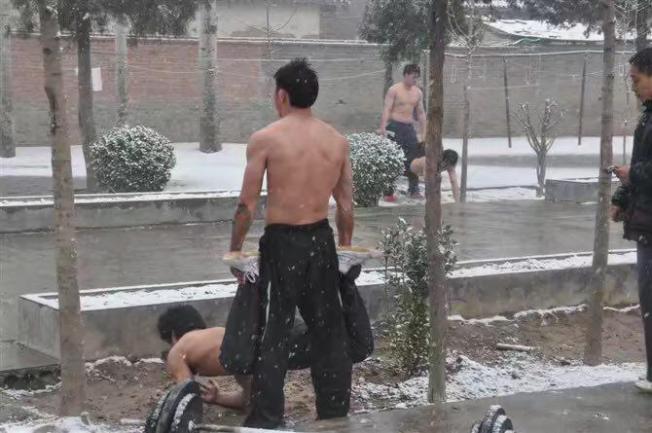 “To develop stamina we would practice frog jumps, running in a crouched position, running while carrying someone on our shoulders etc., until the point where I would be absolutely exhausted.

One method of practicing tuishou was, for example, being in a circle of about twenty students, who would challenge you one after another. When I knock the first one down, the next one would attack, and so on till the last one, after which the circle repeats itself. I also practiced the same circle exercise blindfolded in order to sharpen body sensations. Sometimes during wintertime, shifu would take us outside, dressed just in trousers, to train in the snow. One of exercises was to hold each other by the legs while ‘hand walking’ on the cold or frozen ground.

Before tuishou competitions I always have to control my weight, so during preparation time I would eat less and avoid spicy and very greasy food. Finally, after hard training, it is also important to have a proper rest.”

“There is a saying: “By missing one day of practice, your skill regresses for three days”. So, I make sure that I practice every day.That means that I go at least through forms. And when I have some more time, I do also some fitness exercises like running and weight lifting.”

It really does sounds beyond what most people could have physically and mentally endured at a young age, and more extreme than the training is in Chen Village these days.

There’s a lot of controversy in Tai Chi circles about the role of weight training in internal arts. It’s often dismissed as either unnecessary or worse, damaging to progress. It sounds like the antithesis of the frequently heard advice to relax more. Yang Cheng Fu’s “10 important points” essay is often read as a warning of the dangers of following an “external” path. (I think people often miss the meaning of that text though, so I’ll return to it at a later date.)

When the Chen Tai Chi masters teach seminars to Westerners they keep the focus on traditional conditioning exercises, like silk reeling, or zhan zhuang and forms, which do not involve weights, and emphasize things like relaxation and internal conditioning. Traditionally of course, training with heavy weapons would have been a form of weight training, and village farmers would have naturally been very strong people from all the physical labour, but there still seems to be a contradiction between the methods espoused to Western students in seminars and the content of the syllabus for training young fighters in Chen village itself.

There are also the ‘internet famous’ pictures of Chen ZiQiang doing weight training, and looking very ‘cut’ that spark off these debates, for example:

So, it’s interesting to read the above interview, where Wang Yan makes clear the role that weight training played in training his generation of Chen village teachers, especially when preparing for San Da competition. It’s also interesting to note that they may be the last generation to be trained like that, as “Students now come from more comfortable backgrounds and are, generally speaking, often more interested in computer games than in serious training.”

That’s an interesting point in itself, that makes me wonder if that generation was a kind of high point for martially trained Tai Chi fighters from Chen village. “May the children of your enemies live in luxury!”, as the famous Cynic philosopher Antisthenes said; a quote that echoes the famous poem/meme:

Of course, it’s all a matter of perspective. The people Wang Yan is training now are probably working a lot harder than most people could tolerate, even if they’re not doing wheelbarrows in the snow in winter wearing only their trousers 🙂

If I was training full time to be a fighter and I had a fight coming up in which somebody was going to try their best (under the rules) to hurt/beat me, then you can bet I’d be weight training too! You can’t fake fitness. And no matter how good your Tai Chi skills, if you get out of breath in a fight and your conditioning fails then you can’t fight back. Also, extra muscle mass doesn’t stop you from doing internal movement, although speaking realistically I don’t think that would have been the focus of training going into a fight.

Wang Yan was training as a full-time athlete. As well as doing all the hard physical training he would have been training in traditional Chen family methods at the same time. One does not preclude the other. While some might look down on all that physical training, it appears that the Chen village plan is to develop physical attributes first in its young people, including fighting skills, and later the more subtle Tai Chi skill is focussed on.

And here he is looking pretty good in a San Da match from 2013:

He’s a great inspiration for all Tai Chi practioners everywhere.

2 thoughts on “Thoughts on an interview with Wang Yan, head coach of the Chenjiagou Taijiquan School”