As somebody not involved in academia or academic publishing, I’ve viewed Martial Arts Studies from afar for a while now, slightly scared of getting too close, in case I get bitten by the big words, like “phenomenological” and “liminoid”.

So, it was with some trepidation that I boarded the train to Cardiff for the Martial Arts Studies Conference 2016. Happily my fears were unfounded. This was my first time getting amongst the martial arts studies crowd, and what a lovely bunch of people they turned out to be! Academics are open minded, intelligent people looking to increase their knowledge through discourse. Contrasting views are often encouraged, treated with respect and pondered rather than rejected. It’s a refreshing change from the bitchy world of online discussion forums I’ve inhabited, which seem grumpy, trite and shallow in comparison. Or maybe it was just that meeting people in the flash is always so much more genuine.

Talking of which, the day started well, when I introduced myself to the random stranger I had sat next to for the first keynote and he said “Graham? Wait… are you THE Graham? The nice, funny guy from Rum Soaked Fist? Man, that place has gone downhill!” Ha! Ha! (By the way, yes, that genuinely did actually happen.)

I’ve been trying to think of how to define what martial arts studies is exactly, and I think one of the best ways to describe it is that these people are not interested in the practical ‘how to’ of martial arts, but rather what it means when people do martial arts. For example, what do the kata (or forms) of martial arts signify? What’s really going on when people perform a kata? And are they really performing, or practicing for their own sake? What are the participants of a sparring session actually engaged in? What are they really there for? How is the media selling this? Those sorts of questions.

Here are some of the titles for the talks given, to give you some idea:

“From Martial to the Art: Slow Aesthetics in Transnational Martial Art-house Cinema”

“Masculine identities and the performance of ‘awesome moves’ in capoeira class”.

Since we’re dealing with a subject that is physically practiced there’s always the opportunity for tactile engagement within the subjects, although this isn’t encouraged officially within conference itself (I can imagine the insurance nightmare this could lead to). But while there was no scheduled ‘hands on’ sessions, there was a bit of push hands outside in the rose garden before the conference started, which I sadly turned up to just as it finished, but I did manage to exchange some Choy Lee Fut techniques with Daniel Mroz who practiced the same style for a while, but through a different lineage. Indeed, I thought that the majority of participants in the seminar were also probably martial artists themselves. In short, it wasn’t all pie in the sky. 🙂

This line of thoughtful enquiry into martial arts mixed with real world interaction, humour and observation was typified by the opening keynote speech of the day by Ben Judkins, the author of the excellent Kung Fu Tea” who delivered a talk entitled “Liminoid Longings and Liminal Belonging: Hyper-reality, History and the Search for Meaning in the Modern Martial Arts”, which was about a class on Jedi lightsaber fighting that had sprung up in a mall in America, a trend that is appearing in Europe too, with Ludo Sport at the forefront. How does a lightsaber class fit into a martial arts school’s syllabus? What sort of people are attracted to it? What are they identifying with? All these questions were asked.

They take this lightsaber duelling seriously, too. I’ve got to be honest and say that it looks like great fun – I want a go.

Aside from the keynotes, 4 different lectures went on at the same time, so you had to choose what you went to. So, I missed a lot of stuff I’d have like to have seen, like “Yin Yang, Five Elements and Rhymed Formulae: Traditional Chinese Concepts in the Teaching of Wing Chun”, and “Capoeira Bodies, Two Movies and Every day ‘Realities’”. I could go on – there were a lot of interesting talks I missed, but hopefully a lot of it was video taped, so I can watch it later.

I did however get to see my old friends Scott P Phillips deliver his impossibly titled, “Baguazhang: The martial dance of an angry baby-god“. As you can tell from the name of the talk, Scott likes to hit controversy head on, but give his ideas time to percolate in your mind and they start to make sense. Using copious historical examples, photos and videos, Scott exposed the theatrical and religious roots of Baguazhang, and how they are at odds with the conventional theories of the arts development, which you’d have to agree are unsatisfying and incomplete. Linking Baguazhang to the Chinese god Nezha opens many new lines of enquiry. For instance, Nezha is often depicted holding a cosmic wheel:

And those big weapons associated with Baguazhang… what do they do to the practitioner? How do they make him look?

One of the oversized weapons associated with Baguazhang.

I can’t go into the whole thing here. Scott had 3 hours-worth of material, (which had to be crammed down to 30 minutes), so he had to leave a lot of it on the table. I’d love to watch the full 3 hour version of his talk, and I hope he gets the funding he’s looking for to get it turned into a proper film. If you’re interested in his theories or helping with the project then, drop him a line or buy the book. 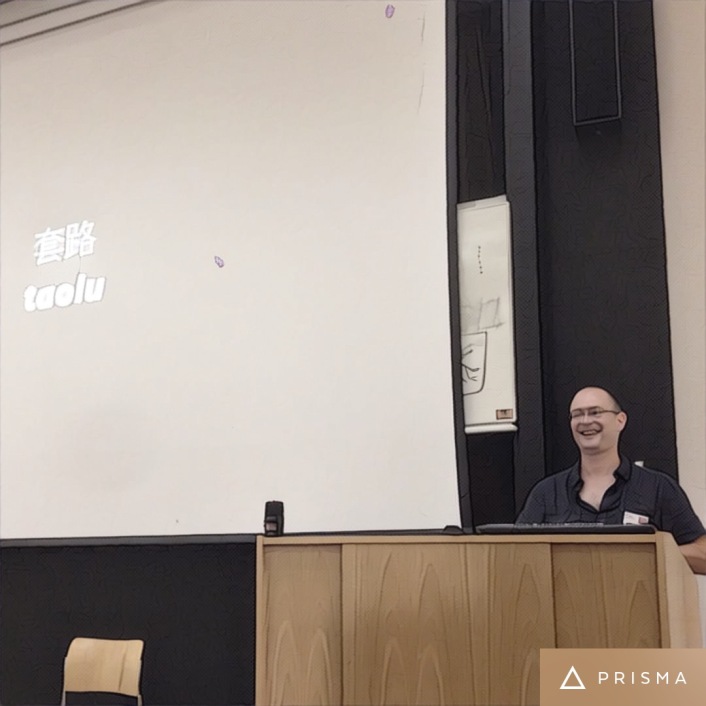 I also got to watch Daniel Mroz’s excellent keynote on “Taolu: credibility and decipherability in the practice of Chinese martial movement” which kind of took off from Scott’s ending point and looked a new perspectives from which the practice of taolu can be understood. Fascinating stuff, including a practical demonstration of how to add credibility to a taolu performance.

Daniel shares a method for adding credibility to taolu performance.

I noticed there were a lot of talks discussing whether or not recreating martial arts from European medieval instruction manuals – “fight books” – by groups such as HEMA can be considered a sound scientific method. I caught a couple of these talks – (the short answers seems to be “no, but it’s not without merit”). The most interesting talk I saw however didn’t seem to care about the pervading academic opinion, and was all about recreating the moves described in ancient Icelandic sagas as modern day wrestling techniques. There was some great detective work going on there.

The conference actually lasted for 3 days, but I only managed to get to the middle day, which made me wish I had more time there. There was so much I missed and so much more I’d liked to have seen.

Overall, it was a refreshingly and fascinating day that will stay with me for a long time, and it was good to meet up with old friends as well as make new ones from across the seas.

Thanks to Paul Bowman for putting on a great conference. I hope to go again.

3 thoughts on “Angry Baby Gods and Lightsaber duels: A visit to the Martial Arts Studies Conference 2016”