The clinch is going to happen, so learn to deal with it. 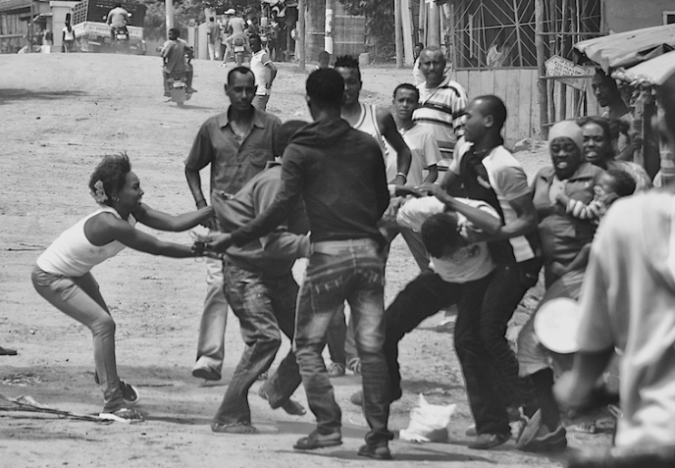 Do you remember the mantra, ‘statistics say that 90% of all fights go to the ground’? That meant we all had to learn ground fighting, and everything else was useless. Then there was the backlash to this mantra, which was, essentially: ‘that’s bullshit, what about knives and guns and multiple attackers?’, which meant that traditional martial arts still had a place even if they couldn’t succeed in the UFC.

Both camps had some hold on the truth, and these days traditional martial arts are used in the UFC more than ever before, but the problem is that the original premise was flawed – fights don’t always go to the ground, they go to the clinch, as this video showing real fights demonstrates. Unless there is a quick KO, fights go to the clinch because nobody wants to get punched in the face. It’s as simple as that. If you’ve ever done any sparring then you’ll know how instinctive it is to grab and pull the other person close, so that they can’t punch you.

Crucially, from there the most dominant grappler will always win, unless there is an intervention from a third party. I experienced this again myself this week when I met up for some ‘push hands’ with a friend. From my perspective I was trying to do push hands, but he seemed more intent on just attacking me, so I ended up just trying to deflect his strikes until I got bored of that and moved into a clinch, at which point I could easily take him down and submit him on the ground, as he has no grappling experience.

So kids, learn some form of grappling, OK?

This point deserves repeating and emphasising, as so many people don’t seem to get it, especially people who train an art full of ‘deadly’ striking techniques.

Today I watched another video of a guy lost in a Kung fu fantasy land where he deflected the non-committed attacks from his compliant demo partner, then performed a number of deadly moves on the guy’s face and neck while he just stood there and let him do it.
People, please wake up! This is not going to work!

Sadly, in my experience,  you can’t change these people’s minds using something as unglamorous as logic and reason. They have a teacher who they trust more than you who is deeply invested in this stuff. Thankfully a real encounter with violence or resistant sparring session can always provide a wake up call.

Kung Fu is full of really interesting stuff, with deep cultural and historical links, and it’s fun to practice. I love it. I don’t think there’s anything wrong with it so long as we understand what it is, and what it is not. Just try to remember the realities of fighting when you practice it. That’s all I ask.

2 thoughts on “Fighting goes to the clinch. Why don’t people know this?”