Here’s the best thing to do after you’ve applied Tai Chi’s rollback. 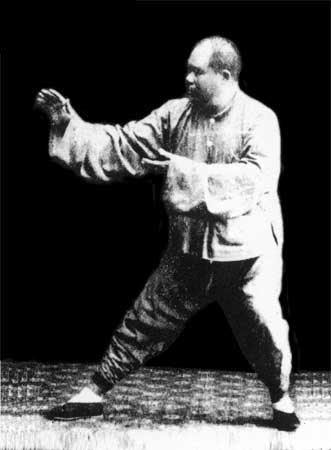 One of the things that comes up a lot in Tai Chi push hands training that’s geared towards the martial side of Tai Chi is what to do with the opponent after you’ve done Rollback. Rollback uses Lu energy to lead the opponent in and control them, with their arm kind of locked, but not to the point where they’d tap. In the Yang form there’s no ‘finish’ from this position – after controlling them you strike with Press (Ji). This is ok, but to me it seems like you’re giving up the advantage you have over them because of the control that rollback affords in exchange for a quick strike. It looks like this:

There are several alternative things you can do – turn it into a push away (into a wall?), turn it into a takedown where you keep the pressure on the arm and shoulder, forcing them into the ground, or you can go for my preferred answer, which is to turn it into a standing arm bar as shown in this video:

1. He puts his elbow over the top of their arm and makes sure the locked arm is snug in his armpit.

2. On the locked arm the little finger edge is pointing to the sky.

3. In the finish position he rotates his wrists around the opponent’s wrist so that both his thumbs point upwards – this gives you maximum leverage on the arm.

4. Once the opponent is controlled you can look around and watch out for further danger from somebody else.

I like this solution because it’s a really powerful arm lock and you can move into it from the end of the Tai Chi rollback posture fairly easily. You can feel it would be easy to break the arm from here, and the opponent is pretty much helpless. Obviously, in a self defence situation the level of force you exert needs to match the severity of the threat you feel you are under, so don’t go breaking the arm of people who have innocently patted you on the back, and also take care of your training partners. Don’t break your toys!

2 thoughts on “Rollback – the unfinished technique”