I spent my lunch hour practicing Tai Chi with the leaves falling around me, which made me realise that Autumn is definitely here. Practicing under the trees also made me think about the strong parallel between the postures of Tai Chi and the structures of nature.

Take trees for example – the branches grow upwards and outwards:

If you look at the postures of a Tai Chi form you can see the same ‘outwards and upwards’ structures:

Animals have the same quality too. The horns on a deer are a good example:

But the alert, ready posture of most animals (when they’re not sleeping) also mirrors this:

The spine is always extended, the eyes engaged and the posture directed upwards and outwards.

The following is a Yang Tai Chi form video. Notice that his body structure is always opening outwards and upwards:

So why do we do this in Tai Chi? Well, natural structures are inherently strong structures. Nature has been working on trees, plants and animals for millions of years, and they have evolved into strong shapes that can take a battering from the elements and survive. In terms of postural considerations of Tai Chi we are aiming to mimic natural structures to take advantage of their inherent strength. For example, with the arms, the elbow is usually kept below the wrist in Tai Chi, when the hand is going up and outwards, this enables your arm to create the same sort of shape as a tree branch that grows outwards and upwards. 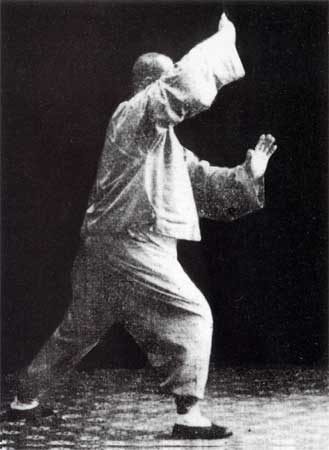 If you collapse the structure of your arms – say, close your joints like the elbows and shoulders too much, you don’t get this effect of mimicking natural structures. Instead, the structure needs to be supported by more muscle usage if it is going to withstand pressure.

Think also of stretching the ‘body suit’ of skin, fascia, tendons. If you bend the joints too sharply you lose the stretch from feet to toes. If you look at a picture of a fower, plant or tree, it looks kind of ‘stretched out’, doesn’t it?

Photo by Tim Gouw on Pexels.com

There’s a lot to learn from nature.

The Daoyintu “Drawings of guiding and pulling” were uncovered in the Mawangdui site in Changsha, Hunan, in 1973. The texts were written on silk. From Wikipedia:

“They include some of the earliest attested manuscripts of existing texts (such as the I Ching), two copies of the Tao Te Ching, a copy of Zhan Guo Ce, works by Gan De and Shi Shen and previously-unknown medical texts, such as Wushi’er Bingfang (Prescriptions for Fifty-Two Ailments).[1] Scholars arranged them into 28 types of silk books. Their approximately 120,000 words cover military strategy, mathematics, cartography and the six classical arts: ritual, music, archery, horsemanship, writing and arithmetic.[2]“

The tombs date from 206 BC – 9 AD, which puts them in the Western Han Dynasty (this was mentioned in a previous post of mine on Buddhism), and contained the burial tombs of Marquis Li Cang, his wife, and a male believed to have been their son. The site was excavated from 1972 to 1974.

The scroll above was found in 1973 and dates to 168BC. Again, from Wikipedia:

A painted scroll on display at the Hunan Provincial Museum and known as the Daoyintu found in tomb three at Mawangdui in 1973 and dated to 168 BC shows coloured drawings of 44 figures in standing and sitting postures doing Tao yin exercises. It is the earliest physical exercise chart in the world so far and illustrates a medical system which does not rely on external factors such as medication, surgery or treatments but internal factors to prevent disease.

What they are doing in the scroll is clearly related to what we call Qigong today – an exercise system that has come out of China. These exercises are still found all over China, and in many cases, the theory behind them has merged with martial arts, and they tend to be practiced together.

The question still remains – what are they actually doing? How is this good for health?

I believe you need to understand “suit” theory to get a handle on what they’re doing. I first heard the “suit” theory from the writings of Mike Sigman. He just posted about it again recently:

Mike: The “suit” idea is that the connective tissues throughout the body and muscles can be developed and conditioned to the point that they wrap the body like a snug spandex/lycra “suit”. The “suit”, however, is not just a passive connection: it can be controlled, conditioned, etc., as an aid and support to strength and movement. The “suit” is just a model that can be used to illustrate the functional qi of the body. As “qi”, the suit responds to controls and actions from the subconscious mind.

First of all, if you’re looking for an explanation of what “qi” is, when it comes to martial arts, or its functional usage, then I think this is where you should be looking. Qi is not some mysterious energy that flows through the universe and through invisible channels in the body – it’s the physical connections you can create through conditioning exercises where you stretch this “suit” and gradually learn to manipulate the body using it. This naturally leads to the idea of the body being moved by “qi” not muscle, which is a phrase we hear given lip service to in Tai Chi, but rarely explained. It sounds initially like magical qi thinking, but if you can understand the “suit” theory you’ll see that it’s actually grounded in a solid practice that builds up over time. Another of the meanings of the word “Qi” is simply breath. However, if you realise that using the breath is one of the key methods you can use to stretch the suit, that also makes sense.

Mike also has videos where he explains the suit ideas further:

Mike: Think of the “suit”, for a moment, as the plastic coating/skin on a child’s soft, plastic-coated doll. Imagine that you can take a doll’s legs in each hand and twist and manipulate the whole doll, including the arms, by the way that you twist the legs of the doll. The connection of the arms to the legs via the plastic “skin” of the doll allows for the conveyance of the twist to the arms. That’s not a great example, but it gives you an idea about how the twisting and control of your own lower body (from waist downward) can be conveyed through the “suit”/functional-qi to effect movement in your arms and upper body.

Looking back at that picture on the silk painting from the “Drawings of Guiding and Pulling” in the Mawangdui Silk Texts, you can see that these are clearly stretching-based exercises – the arms are lifted to either shoulder height or above the heads and stances are being deliberately taken. So what are they doing? My answer would be that they are conditioning this suit.

A good way to think about the suit is by splitting it into yin and yang – the yin parts cover the soft, ventral,  areas of the body – the front, the insides and backs of the legs, inside of arms, and the Yang parts are the harder, dorsal, parts – the back, outside and front of legs and arms. “Breathing in the Qi” is usually done by “pulling” in on this connection on the yin parts of the suit, and expansion is usually done by releasing the pressure and stretch that this has built up using the Yang parts of the suit  – “guiding” – as you breathe out and open the body. Remember, Tao Yin was called “pulling and guiding”.

John Appleton’s Posture Release Imagery web page is a good source for seeing how this ventral/dorsal split works in both humans and other animals.

The point of qigongs is to develop the connections in the body to the point where you can feel them and move the body with them through natural cycles of open and close.

Mike: It’s a little bit difficult to feel the connections of the “suit” at first, so the first thing you have to do with qigongs is begin to develop the connections of your body by using breathing techniques to strengthen the connective tissues. Gradually, you develop your qi/”suit” all over the body and you learn to control it as an aid and support to your musculo-skeletal strength. There is an interesting thought mentioned in some Chinese thought that wild animals still have this rapport of qi and musculoskeletal strength; humans (it is opined) have evolved out of this rapport and have to be taught to control and develop their qi in this manner.

So, there’s the hint for what you’re looking for in your qigong exercises: “using breathing techniques to strengthen the connective tissues.”

At all times the body length connection  – the slight stretch on the suit – must be maintained  – “don’t break the qi”.

(Credit to Mike Sigman for the quotes, and the suit concept).