The writings in the Taiji Classics really only make sense if you understand what they’re saying already. As we’ll see… 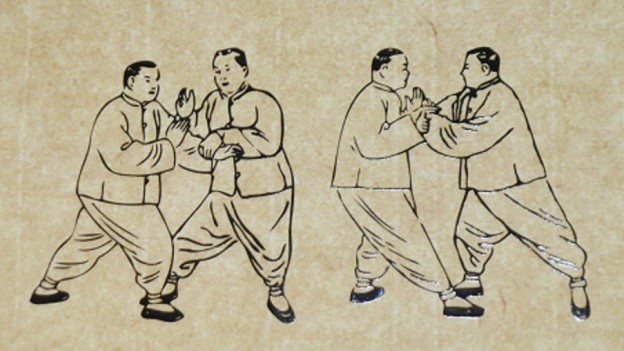 Everybody who practices Taiji and has read the Taiji Classics is familiar with the idea of using the legs as primary generators of force, rather than the shoulders and arms.

As it says in the classics:

“The chin [intrinsic strength] should be
rooted in the feet,
generated from the legs,
controlled by the waist, and
manifested through the fingers.”

Reading that, you’d think that it’s talking about simply pushing off the ground with the legs to generate force. But that’s not the whole story. It couldn’t be – I mean, a good boxer punches from his legs in a similar manner, getting the force of the whole body into the shot. Taijiquan is supposed to be ‘internal’ and involve a different way of moving than regular athletic human movements. Isn’t it?

This mention of ‘controlled by the waist’ here is the key. It’s referring to the fundamental idea in Taijiquan that the dantien area of the body (basically, the waist, but inside, not just on the surface) is controlling the actions of the arms and hands, so they don’t move independently of the movements of the body. This should be true of any Taiji movement, regardless of the particular style of Taijiquan being practiced.

This is such an important concept to Taijiquan that in a lot of interviews (like this one) Chen Xiao Wang, the head of the Chen style branch of Taijiquan, calls it his “1 principle”:

You could also sum up this concept using the phrase, “Hands follow body”. (Later on you get ‘body follows hands’ – but let’s not worry about that right now).

It’s important to note that this mode of movement is contrary to the way we normally move in everyday life. It’s very common for people to be able to understand it intellectually, but not be able to physically embody it. It’s also very difficult to do it consistently. In Taijiquan you need to do it all the time, and without cheating! Take your mind of it for a second and you’ll find you revert to using your ‘normal’ movement again; you’ll use your shoulder and upper body to move your arms. Throw in working with a partner who is providing resistance and it becomes even harder to always move from the dantien.

Incidentally, I think one of the reasons for the incredible amount of solo form work found in Taijiquan is that you need to practice this stuff for months and years for it to become ingrained in your body, so that it becomes the default way you move, even under pressure. Hence the need for regular form practice.

So, the dantien moves, and it moves the hands. So far, so good. The next question is ‘how?’ How, exactly, can moving your legs, hips and dantien control the actions of the arms and hands?

The answer lies in the muscle tendon channels that connect the body internally. They (generally) stretch vertically from the hands (fingers) to the feet (toes) either on the front of the body (yin channels) or on the back of the body (yang channels). It’s important to note that the channels themselves don’t really cross over the body from side to side – they generally run vertically. Credit needs to go to Mike Sigman here, for introducing me to this concept of muscle-tendon channels. 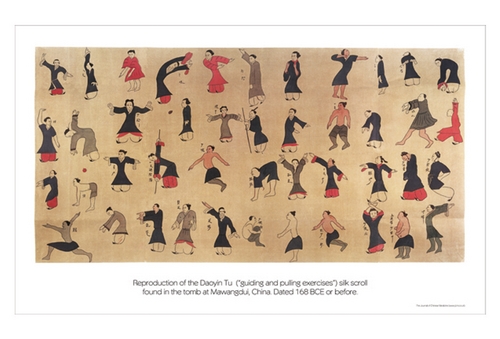 The theory is that muscle-tendon channels were the precursor to the acupuncture channels that we’re all familiar with these days, and are a roadmap of the strength flows and forces of the body. If you really want to get into it, there’s a fuller explanation of the theory on Mike’s website, but the TLDNR (too long, did not read) version is basically that if you create a stretch on the muscle tendon channels from end to end, so they are somewhat taught, then you can start to manipulate them via their central nexus – the dantien – so that a movement of the dantien can power a movement of the hand (or foot). Yes, it’s more complicated than that (there is more than one dantien, for example), but that’s the basic idea.

If you remember back at the start of this blog post, I quoted some lines from the classic that says the progression in generating movement in Taijiquan starts from the bottom and goes upwards, yet at the same time we’re being told that all movement starts in the dantien, which is definitely not in the feet. So, we have a contradiction. Or do we?

Here’s the thing: If you use your legs to push upwards off the ground to generate force you get a kind of “muscle jin”,  since you’re not using the power of the dantien, as described by Chen Xiao Wang. To really get to the meat of what it means to use Jin (refined force) in Taijiquan you need to learn how to send force downwards from the dantien to the ground, and bounce it back up simultaneously. So, the originator of the upwards force is still the dantien, and the general direction of force is still upwards from the feet.

For example, when you’re loaded onto the rear leg, and ready to push forward you’d actually start by sending force from your dantien area downwards, “sink the qi”, and the bounce back force that comes up from the ground is what you use to push the opponent away. It should be noted that sending forces down to the ground from the dantien and bouncing it back into the opponent is simultaneous – there’s no time delay.

The next time you go swimming dive down to the bottom of the deep end and stand on the bottom then push off the floor and send yourself upwards to the surface. What you’ll notice is that you naturally want to drop your weight down before you push up. This is a crude kind of approximation of what’s going on in a Taiji push.